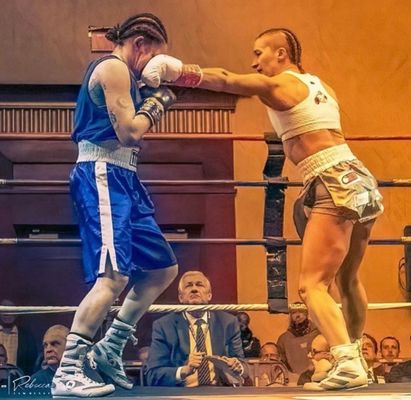 Jaime “The Hurricane” Clampitt capped a banner weekend for CES Boxing Saturday night with a unanimous decision win over Kim Wabik at the Crowne Plaza Hotel; her first victory in nearly a decade.

Clampitt (23-5-2) came out of retirement last summer, two years after being inducted into the International Women’s Boxing Hall of Fame. On Saturday night she headlined CES Boxing’s 2022 debut and its inaugural event at the Crowne Plaza.

Flanked by longtime promoter Jimmy Burchfield Sr., CEO and president of CES Boxing, Clampitt capped the event – appropriately titled “Rhode Wars” – in front of a sold-out crowd with a dominant performance against Wabik (4-2-2), who, despite continuing to come forward the entire fight, could not thwart Clampitt’s experience and ring savvy.

The victory, scored 60-54 on all three scorecards and was Clampitt’s first victory since 2013 when she defeated Dominga Oliva.